never mind i was right and i found the answer!!! :)

i got the ghost amulet!!!

THIS TABLE HAS ALL THE DATA FROM EACH FLOOR IF THIS RIGHT!

TOTAL GAME COMPLETION 33%
as you can see from the photo im am stuck on this one room.

ok, this not my photo from me playing but Im still stuck on it and i can't get a screenshot 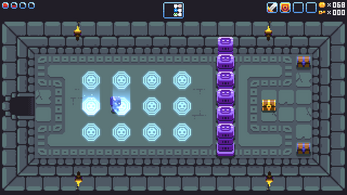 Still i'm stuck on it if someone will tell me how to solve it, that would be very much appreciated, thank you! ( ͡ ͜ʖ ͡ )

There are 2 ways to solve this puzzle. Easy one: QR code on the same floor contains solution. Hard one: look for the small square holes on the floor located in some rooms on this floor. They are hints for the right combination. If you can't progress any further buy a key from the merchant or look for the key you might've missed on the previous floor.

Anyway if this comment won't help you let me know. I'll give you a solution.

I'm currently working on a Zelda-like game with low-poly visuals and I must say that the simplicity on your game was truly inspiring. Thank you for this game!

Thank you for playing! Comments like this are very inspiring

What can i say? Perfect work, pixel style dungeons, a few types of enemies. Music as good as my memories from nes-retro games :) Really good work!

Thank you very much! I've put much effort into this game :)

Glad to hear we managed to make someone laugh

Really nice game, even though I didn't expect that I would need my smartphone for it :-D

Glad that you liked it ;)

I love the sound track and the gameplay is good as-well.

Just a good game all together.

Keep up the good work man.

Still the sound track can i download it lol have a good one...

Thanks a lot! I've put much effort into this game.

Soundtrack is added to the downloadable files list. Enjoy :)

Cool game I hope more is made of it

Glad that you liked it

do you plan on making a longer version of this game

Yeah, I guess that I'll make an extended version of Knightin' in the nearby future

I love the art style!

Altough i would love to have different music for the areas. The soundtrack started to get really repetitive after a while.

PS. what game engine did you use? :D

Thanks, glad you liked it :)

this game needs to be put on steam

I'm going to make an extended version for steam

I always love a good zelda inspired game. 10/10 wish there were more levels

Thanks for playing my game! It was very fun to watch. And your thumbnail made my day :D

Great game so far!  I love the controls and the graphics!  The music is also good, but it can get a little repetitive.  The QR code puzzle was a really nice touch.  I'd definitely like to play more in the future!

I had much fun watching your video! You keep missing a key on the first floor. It's hidden in the chest in the room with QR code (bottom left). Hope this will help.

Glad you liked it!  I'll see what you're talking about when I play again.

This was great, thanks:)

I'm liking it so far :o I had some issues with the cyclops enemies, but overall it felt like one of the better Zelda-like dungeon games I've played.

I guess I need to fix my phone's issue of not being able to scan QR codes >< Would've loved to see what was beyond some of those locked areas I found...but anyway.

I covered this game for my YouTube channel. Hope it helps!

It's a nice video you've made. Thanks! QR codes contain puzzles' solutions. But there are another hints to solve them. You need to use shield more to fight imps (cyclops) effectively ;)

Reply
bowl of ricee2 years ago

Great game! I've barely played it for 20 minutes, and the QR code puzzles really suprised me. I've never seen anything like this before. It's games like these that I come for to itch.io. Great work Wolod!

Thanks a lot! I've put much effort into this game.

Wolod, You made a gem. The art is awesome and the gameplay is really fun.  I also love the music.  I am eagerly waiting for an expansion.

Thank you very much! I hope that it'll be worth waiting.

Very fun game and despite the speed run, I spent roughly an hour or so figuring out how to properly play the game. Also I encountered 2 glitches, 1 where I died and the game loaded into a different map where the Knight didn’t show up and it was locked on that screen.

2nd glitch was dying on the map that the game randomly loaded me into last time and respawning at the last save, but the pause menu didn’t work. The game paused, but there was no text and I couldn’t move the cursor and mashing buttons didn’t do anything. Game worked fine despite the pause menu dying, but I closed the game afterwards. Time stamps for the video if you want to see it in action: 6:24 and the game version was 1.2

Dang. You beat me to it.

Congratulations on a world record! I'll look to that glitches today.

Control hints are shown on the dungeon's floor. But here you go.

Very cool game, I'm wondering how much time did you spend doing it  :P

freezing movement after you open a chest seems pointless. Just an annoying feeling delay for the player.

Really cool game, man! I wish you'll do more awesome games like that!

Thank you! I definitely will!

art is cute and you are doing some cool stuff with the puzzles, QR codes and all that. Good job :)

Second: After I died, instead of respawning me at the checkpoint, it instead reloaded on the room with the staircase to the next floor, and my character was not on screen. I could not move or do anything else, and was forced to restart the game from the beginning (reloading my save file didn't fix it).

Fortunately I was only on the third floor, so it wasn't that bad.  Great game, by the way.

Also, why are there no invincibility frames?

Thank you for the bug report. Those 2 glitches you described are parts of one big nasty bug. However it should've been fixed in version 1.2. Did you encounter this bug on older version of the game or on 1.2?

You'll get invincibility after getting hurt if you buy Ghost Amulet in the shop.

I was playing the web version on the game's page. I didn't pay attention to the version number.

Beautiful game, just excellent, i just killed the boss it was so funny. To solve the second puzzle i draw a map and put al thoese circles in the map it feels so great, well done! Greetings from Colombia!!

Thanks a lot! Great job on solving second puzzle without a QR solution!

Like it a lot! Very beautiful grafic. Not much to add or say. :)

Thanks! Glad that you liked it :)

Fantastic game.
Beautiful pixel art.
The fight against the boss was very good, but easy.
Congratulations on the project.

Thank you very much!

The first puzzle was a cinch, but the second one was freakin' difficult. Still got it after some time though =]. Had to get a friend to help out just to figure it out.

Wrote a quick little review to tell our fans about your game.

Thanks for your amazing review! It's awesome!

I liked it. I haven't played a game like this for a long time. It took me a bit to get the light puzzles though; is there a logical pattern or is it just random?

Thank you, glad that you enjoyed the game :)

There are 2 ways to solve puzzles. You can look for the hints hidden on the floor (small square holes) and figure out solution yourself, or you may find a QR code with a solution.

It was fun video you've made. Thanks for playing!

I used you game as an example to my Game Design class. Perfect example of what I call a room crawler (IE Legend of Zelda). They had fun playing your game. Great work.

Thanks a lot! It's a big honor for me that you used my game as an example. That's really cool!

i love zelda and i love this short game, thought the graphics looked awesome and loved the simple nature of the game which meant that anyone could play it. i hope you continue making games like this (hopefully a bit longer ;)) and that they are also still available for mac. 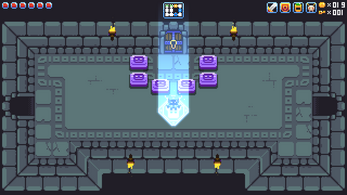 Not sure if it's intentional or I'm missing something, but I feel like there is a key missing. Looking at the attached image, it shows 6 health and 1 key, but I have 6 health and no key. I think I've explored the entire dungeon and I've grabbed every chest I've seen.

You can buy the last key for 50 coins.

That's including buying the key

nvm, I did the first floor in a weird order and missed a key there